On 18 May YES!Delft reached its tenth anniversary. The occasion was celebrated with Prime Minister Mark Rutte, Neelie Kroes, various investors, all of the YES!Delft entrepreneurs and representatives from the business community.

150 companies
It was actually Mark Rutte, then State Secretary for Education, who opened the incubator YES!Delft back in 2005. In the ten years since then, more than 150 new companies have been launched in programmes like the YES!Delft LaunchLab and hundreds of new technologies have been patented. Now, in 2015, the companies are active in more than 80 countries and together account for invested assets in excess of EUR 130 million and over 1,000 jobs. Next year, capacity will increase with the addition of a second building. Listed in the UBI Index 2014, YES!Delft is one of the leading business incubators in Europe, partly thanks to such business successes as Ampelmann, Senz, Epyon, Ephicas, Lacquey, Eternal Sun and Nerdalize.

An engine for innovation 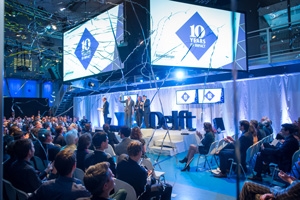 In his speech, Prime Minister Mark Rutte congratulated YES!Delft on these successes. He said that the Netherlands had developed into one of the most enterprising countries in the world over the last ten years. “One in eight Dutch people earns money as an entrepreneur. In 2014, there were more than 65,000 new businesses, making a record total of 1.5 million businesses in the Netherlands. The last ten years have seen the number of businesses increase at break-neck speed and it is no coincidence that Yes!Delft is now ten years old.” He also said that there have been 650 additional start-ups since 2010 thanks to the universities.

“A large proportion of the generation currently growing up will probably become entrepreneurs at some stage in their careers. Organisations like Yes!Delft are sowing the seeds early. They are demonstrating to students the real potential of business and providing guidance to make it a success. This is something that young people want to be a part of, said Rutte, also describing Yes!Delft as ‘an engine for innovation’.

The greatest successes are still to come
Neelie Kroes complimented YES!Delft on the progress made by the incubator since her last visit and the plans to open a second building for YES!Delft this year. “It only strengthens my enthusiasm for start-ups,” she said. It is not only the number of successful start-up companies in YES!Delft that is so impressive, but also the amazing growth some of them are achieving, like Nerdalize and Eternal Sun. But Kroes believes that the greatest successes are still to come. The Netherlands has plenty of knowledge and entrepreneurial spirit, but that is only the start. If we want to rank among the world leaders, we need to upscale, increase cooperation, pursue grander ambitions and above all not underestimate ourselves. Those with the courage to achieve that should join institutes like YES!Delft, advised Kroes.

“Leo de Vreede is involved in several spin-off companies and numerous patent applications that are a testament to his valuable scientific research,” said jury chairman Dirk Jan van den Berg, President of TU Delft’s Executive Board. “Frido Smulders is able to inspire his students to think unconventionally, resulting in solutions that can change the world.”